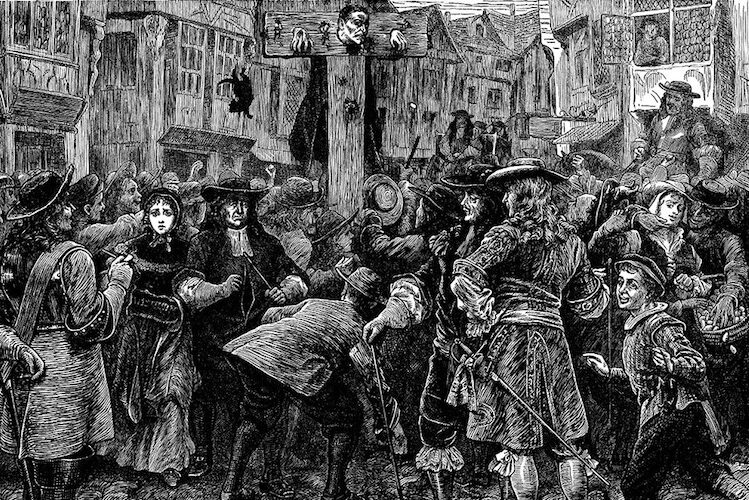 The truth will set us free – the Old Town and its links to conspiracy theories that gripped the nation.

Was there a cover-up by the United States government to suppress the truth about who killed President Kennedy, 57 years ago next month? Is Elvis still alive? Did men really land on the moon in 1969? Did Jesus survive the Resurrection and take early retirement in the south of France with his wife Mary Magdalene?

The board showing all the previous Rectors of All-Saints.
Conspiracy theories came to mind when I looked carefully at the list of parish priests in All Saints’ Church. The list goes back to 1250 before the present church was built and the first priest is simply named as ‘Ralph’.

Looking back at such a long list of predecessors is pretty awe-inspiring and I was struck by the name of the clergyman listed in 1660. His name was Samuel Otes (Oates) and it was his son Titus, baptised in All Saints, who began a conspiracy theory which was to have a disturbing effect on English history.

Titus Oates does not seem to have been a very attractive character. In 1675 he was formally accused by one of the All Saints churchwardens for ‘presuming to preach, having not orders’ (i.e. not being a clergyman) and for being ‘a malicious, disorderly, scandalous person’.

Three years later, the Kingdom was gripped by the ‘Popish Plot’, an alleged conspiracy invented by Oates which claimed that there was a Roman Catholic plot led by the Jesuits to assassinate Charles II and install James, his Roman Catholic brother, on the throne. For three years the land was gripped by an anti-Roman Catholic hysteria which led to at least 22 executions, countless false accusations and serious effects upon the civil liberties of all Roman Catholics for well over a century.

Oates’ lies were eventually exposed and the notorious Judge Jeffreys ensured a guilty verdict, imposing the harshest sentence he could short of execution which was not available as a punishment for perjury. After a harsh imprisonment, he was pardoned by the Protestant William and Mary and died in obscurity in 1705.

Dr Titus Oates (1649 – 1705) was the son of All-Saints Rector Samuel Oates. He was involved in the Popish Plot when he published details of a fictitious Jesuit plot to murder Charles II and restore Catholicism in England.
Who knows what conspiratorial thoughts went through Titus Oates’ mind as he walked the streets of the Old Town or said his prayers in All Saints. What we do know is that they caused the death of many and branded all Roman Catholics as essentially unpatriotic and potential agents of a foreign power – the Pope. Roman Catholics were to suffer as a group because of this until the Catholic Emancipation Act of 1829.

Conspiracy theories are not new but they are on the rise, along with the number of people believing them. For example, the former BBC sports presenter David Icke believes that the world has been ruled for centuries by human flesh eating alien reptiles in human form, these include the Royal Family and 33 US presidents.

It’s easy to laugh at such theories and feel superior to those who fall for them and those who peddle them but it is not always a laughing matter for the victims of such theories.

We may well laugh at Icke but he also believes in the classic conspiracy theory that the world is controlled by Jews. This conspiracy theory, popular since the late 19th century, led to the gas chambers of the 20th.

Jesus said the truth will set us free.

It is the duty of us all, whatever our religious (or non-religious) beliefs may be, to seek the truth and challenge falsehoods. This is not always easy because it requires us to be well-informed and willing to check the facts. We also have a natural reserve when it comes to challenging people. Everyone is entitled to an opinion but that does not mean that all opinions are equal in worth.

It is the truth that can set us free from prejudice and ignorance.

Titus Oates is long gone from Hastings but, alas, conspiracy theories are not.

(This article by Paul Hunt was originally published in Hastings in Focus in October 2020 and is republished with permission.)

© 2022 PARISH OF ST CLEMENT WITH ALL SAINTS, HASTINGS. ALL RIGHTS RESERVED